You are at: Homepage /  discover and explore /  points of interest /  castles /  st. gothard castle

Rare example of a grotto castle, enveloped in mystery and famous for the legend of the dragon 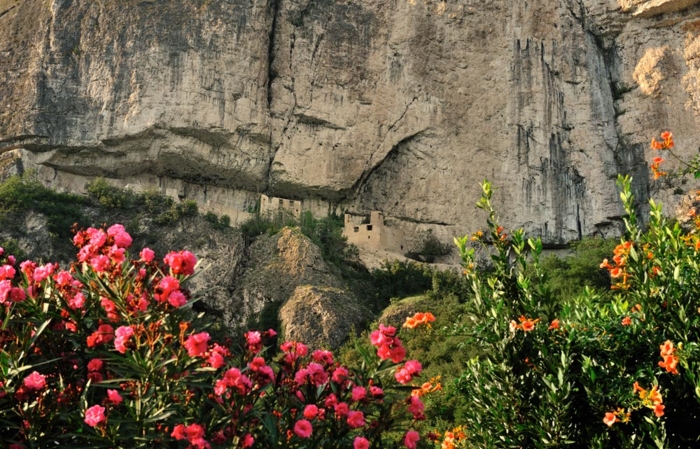 Castel San Gottardo (St. Gothard Castle) is an entrancing castle built in a spectacular position, tucked away in a crevice in the rock overhanging the town of Mezzocorona. It is intriguing not only for its position, but also for the legend of the dragon that supposedly lived there, a legend which was reinforced by the discovery a few years ago of dinosaur footprints right where the basilisk is said to have lived.

The castle is a rare example of a cave or grotto castle, a medieval refuge built into a natural cave or a rock face, and was in its day one of the largest and most powerful in the whole Trento principality. This type of castle is known as a 'Corona' in Italian and 'Corona di Mezo' was the original name of the castle. It only later became known as Castle S. Gottardo, its current name. Mezowas the name given to the whole of the plain spread out below the castle and extending over the right and left banks of the river Noce, a name that is alleged to derive from the Latin word medium meaning 'middle', 'centre'.

The cave where the remains of the stronghold can be found was a 20 minute walk from the town along a steep footpath winding up the mountainside, today unsafe and closed. The castle is now in ruins, although the entrance portal can be made out, above which can be seen traces of a fresco of a double coat-of-arms and a dragon and the embrasures which served to defend the entrance to the fortress.

Also in the cave are traces of a building which was probably a defensive outpost, the remains of the main dwelling, once the residence of the Firmian counts, lords of Mezzocorona, and the remains of the little church dedicated to St. Gothard, the town's patron saint, built into the rock at the beginning of the 13th century and which soon became a sort of sanctuary and place of pilgrimage.

The castle must have been built before 1181, the year for which we have the first written record of it. With the arrival in our valleys of the Renaissance and its new concepts in living, the cave castles were demolished to make way for comfortable, aristocratic residences. And this was to be the fate of Castel S. Gottardo, which was abandoned when the count moved to a fortified residence at the foot of the rock face, known as Castel Firmian. More comfortable, it had a square tower and was surrounded by a crenelated wall and a deep moat.

The castle acquired archaeological interest after the discovery of dinosaur fossils in the cave where it was built.

The Legend of the Basilisk

In the rock face overlooking Mezzocorona there is a large cave. In the Middle Ages, there was a castle inside it...