You are at: Homepage /  discover and explore /  points of interest /  the fascination of local history /  from the mesolithic to the bronze age

From the Mesolithic to the Bronze Age 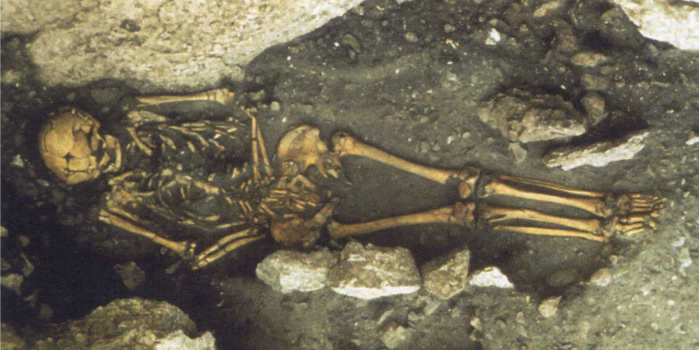 The oldest evidence of human activity in the Piana Rotaliana dates back to the Mesolithic period (from the 9th to the middle of the 6th millennium BC). Traces of settlements attributable to this era have been found in Mezzocorona in the area around Dos de la Forca (the village of Ischia) and in the Borgonuovo area.

The discovery of a burial site in an excellent state of preservation, which archaeological data show to belong to the more recent phase of the upper Mesolithic era (middle of the 7th millennium BC), is of exceptional importance. The burial site contained the bones of a female, over 30 years of age, lying in a supine position at the bottom of a shallow grave at the foot of the rock face. She is now commonly referred to as the “Mezzocorona grandmother”. The burial chamber was covered with more than 40 dolomitic rocks, placed directly on top of the body in the form of a small tumulus. The funeral ritual of the Borgonuovo “grandmother” perfectly matches that found at the burial site of a female which came to light in 1968 at Vatte di Zambana.

During the excavations, before the bones were removed, a cast was made of the skeleton, with which it was possible to create a perfect copy of the original burial chamber, which can now be seen in the Palazzo della Vicinia in Mezzocorona.

There is a wealth of archaeological evidence dating back to the Copper and Bronze ages in the Piana Rotaliana showing the importance of its strategic position where the north-south line of communication (Valle Isarco and Valle dell’Adige) crosses that running east-west (Valle di Non and Valle di Cembra). The various finds are mainly artefacts associated with funeral rituals, significant numbers of which have been found at the sites at Dos de la Forca, Mezzocorona Borgonuovo and Nogarole di Mezzolombardo. The discovery of a bronze sword on the bed of the river Noce (early Iron age) is also of interest. It was probably placed there as an offering to a water god. The Piana Rotaliano area reveals a broad cross-section of life in Copper, Bronze and Iron age communities, providing insights into their funerary and religious rites, their settlements and the things they manufactured.